The Biochemical Institute was founded by the late Roger J. Williams (1893-1988) who came to the University of Texas in 1939 and founded the Institute in 1940 with funding provided by Benjamin Clayton and the Clayton Foundation.   Dr. Williams believed that the best approach to understanding biochemical issues related to health and disease would come by fostering the efforts and collaborations of individual investigators to succeed in their particular areas contributing to the fundamental understanding of proteins, enzymes, vitamins, nucleic acids, etc.  Thus the Biochemical Institute always operated as an association of semi-independent investigators whose programs were facilitated and augmented by resources provided through the Biochemical Institute.

Benjamin Clayton, Houston businessman, civic leader and early benefactor of the Biochemical Institute, was one of the founders of the Anderson, Clayton and Company - a Houston cotton firm.   He was also a trustee of the Texas Heart Institute and a life-member of the Board of Directors of the Texas Medical Center.  He had an abiding interest in scientific research and the relationship of nutrition and disease.  In 1932 he founded the Clayton Foundation for Research which has generously supported research at the University of Texas at Austin as well as other components within the UT System, not just in science but in the arts, pharmacy, the UT Law School, and the LBJ School of Public Affairs.   Early on Benjamin Clayton became friends with Roger Williams, noted UT-Austin biochemist, and they shared the belief that basic advances in biochemistry and nutrition were critical to the ultimate prevention and treatment of disease.  The Biochemical Institute at the University of Texas at Austin was founded in 1940  with a grant from the Clayton Foundation for Research.  Dr. Roger Williams served as Director of the Institute from its beginnings in 1940 until 1963, when Dr. Lester Reed became its Director and served in that capacity until 1997.  Benjamin Clayton died in Houston on November 12th, 1978 at 96 years of age.

Dr. Roger Williams wrote 21 books, published  275 scientific articles, was elected to the National Academy of Sciences in 1946, and elected President of the American Chemical Society in 1957.   Dr. Williams served as Director of the Institute from its beginnings in 1940  until 1963.  The Institute under Dr. Williams direction helped build a strong and diverse program in biochemistry at the University of Texas at Austin.  Did you know that more vitamins and their variants were discovered in the Biochemical Institute than in any other laboratory in the world?  During this time pantothenic acid, two of the three forms of vitamin B6, lipoic acid, avidin, and folinic acid were discovered, folic acid was named and concentrated, the isolation of vitamin B12 carried out, and pioneering work done on inositol.   Dr. Williams was instrumental in attracting Dr. Karl Folkers, founder and Director of the Institute for Biomedical Research and noted biochemist working on the benefits of coenzyme Q, and others to the University of Texas to make it one of the nation's leading centers for biochemical and nutritional research.  To learn more about the many important contributions of Dr. Roger Williams and his colleagues, click on the names of these famous biochemists. 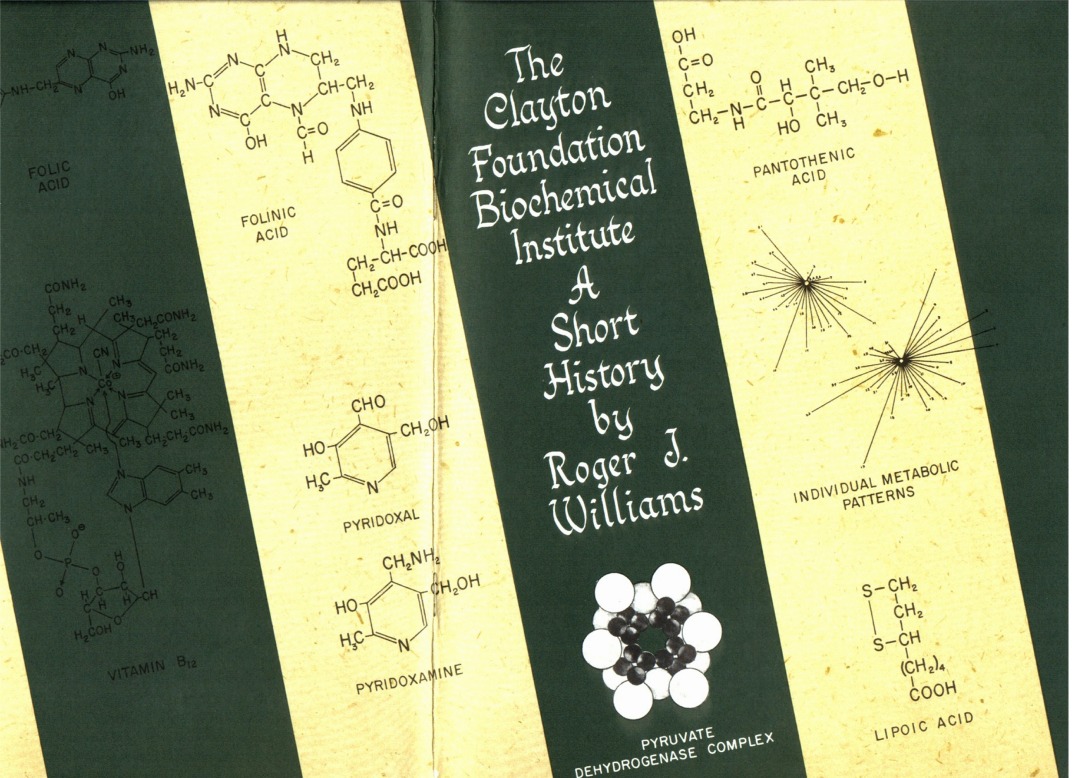